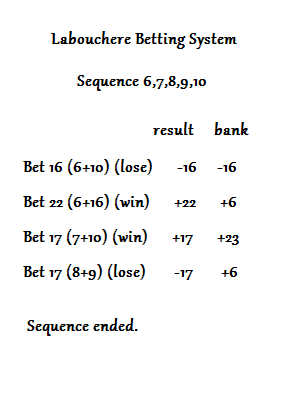 The Labouchere baccarat system, also known as the cancellation system is a betting strategy or system that is widely used for gambling games, which offer even money bets. It differs from other such strategies with few specific rules – a player who decides to use such strategy has to define an amount of money he would like to win. This sum is then divided into a list of numbers, which determine the amount of money player should be betting in each hand. To be more specific, the bet amount is determined by summing the first and last numbers on the list. In case of a successful bet, first and last numbers are crossed out. On the other hand, if the bet is lost, the amount bet is added to the end of list. We’ll go into specifics later in the article, so don’t worry if you don’t understand it by now.

The theory behind Labouchere is quite simple – as you’ll be crossing out 2 numbers after each win and adding only one after a loss, you won’t even need to win the expected amount to complete the list, thus win an amount of money you’ve desired.

How The Labouchere Baccarat System Works?

This is a really fast way to win the amount of money you are looking for, if you want to win a large amount of money, but don’t want to risk as much money as in this example, add more numbers! This way they will be smaller in size and will feature smaller variance, but the list will also be longer and a little harder to finish. Once you are down to the final number, it describes your betting amount. If you win by betting it, congratulations! You have completed the list and won the desired amount of money!

The Labouchere baccarat system is really easy to understand and use, which will fit both beginner players and those experienced ones!

It offers a really quick way to win the amount of cash you desire, it doesn’t matter how big.
Disadvantages

Players with small bankrolls will find this system a ‘no-go’, as it features a high risk of ruin and variance.

If you experience a bad run, you might reach the table limits really quick. You can see that a few losing hands in a row will mean that you bets are getting rather big. It’s also easy to get to a point where the system is longer than 10 numbers and seems to be a never ending one!

Flaw In The Labouchere

While the system seems really promising, I’ll have to make you sad – it’s not profitable longterm. In fact, no system is, as the house edge will always be there and you’ll be a mathematical underdog. However, it’s not all that bad as use of this system will make playing baccarat even more fun. It also can gain HUGE net profits short-term, so if gambling addiction is not a problem, you’ll have a shot at winning some serious amount of cash! As we said in other articles, you’ll always benefit from use of a baccarat betting system! It can help you stay focused and follow a specific set of monetary rules.