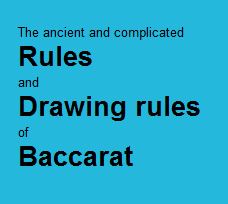 The rules of the game are somewhat complicated, but you can, and should, be easily able get to know them with just a little bit of study.

In the online version of the game, you can play without knowing the rules at all. So too in the version you will find in real world casinos, so long as you are playing the more popular version and not the high roller version, which has slightly different drawing rules.

We are really more interested in the rules that apply to the game that you will play online. This version is more properly called Punto Banco, or mini-Baccarat, to differentiate it from the original game, which can still be found in some casinos, mainly in Europe and Asia.

While there are no decisions for the player to make in this version – the software will deal the hands according to the rules – and all you really have to do is to place your bet and click the ‘deal’ button, it will really help with both your understanding of the game and your enjoyment, if you know what is happening and why it is happening.

As I said above, the rules are a bit complicated, but I will try to simplify them here.

There are two sets of rules; the rules of the game, whereby the winner is determined, and the drawing rules, whereby two cards are dealt to both the player hand and the banker hand, and then it is determined if and when a third card should be dealt to either hand.

Let’s look at the first set of rules first.

The Rules of Baccarat

These are quite straight forward. The player will make a bet on either the Player hand, the Banker hand, or the Tie. The dealer (also known as a croupier) will then deal two cards to these hands in succession. These are dealt face up. The totals of each hand are then calculated by the dealer, and if a third card should be dealt to either hand, then the dealer will do so.

No more than three cards can be deal to either hand. The hand that totals nearest to nine will win. If both hands have the same total, then the Tie bet is a winner, and bets on any other hands are refunded.

There are online variations – software based – whereby you the player actually plays the the Player hand, and the cards are dealt face down, with you the player having to turn them up. But that is only a cosmetic alteration in the game play, added for entertainment purposes, and it in no way influences the outcome of the game.

The Drawing Rules of Baccarat 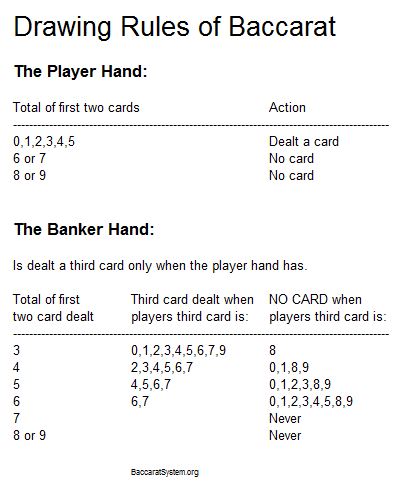 The manner in which it is determined whether a third card will be dealt is more complicated.

First, remember that the value of the cards is as follows; cards from Ace to Nine are valued at their pip count. So an ace is worth one point, a seven is worth seven points and so on. Face cards – Jack, Queen, King – and tens are all valued at zero. For some example hand valuations see here.

Once you understand that, then the rules for drawing a third card will make much more sense to you.

If either the Player hand or the Banker is dealt a total of 8 or 9 in the first two cards (known as a “natural”), then the game is over, and the winning hand is determined on just those cards.

If no hand is dealt a natural 8 or 9, then the following applies;

In the case where a third card was dealt to the Player hand, then the following table applies;

You don’t really need to understand why these rules are as they are, and why they need to be so complicated, as this is simply how the game is played and that is that. To be fair, if the winner of the game was determined solely on the first two cards dealt then it would be more like a game of hi-lo than anything else.

These complicated rules certainly add to the sense of mystery that still surrounds the game. Which tends to give it the cachet of a more sophisticated game than it really is.