The story of the game of Baccarat stretches back to the dawn of time, and like most good stories, the origin of the game is shrouded in mystery. 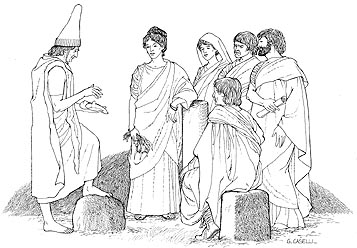 There are a number of versions of the story floating around the internet.

Having read quite a few of these ‘histories’ however, I suspect that they are all rewritten versions of this history. All those stories talk about an Italian gambler (or maybe a French croupier) called Felix Falguerein as being the inventor of the game, and then they ramble on about Etruscan rituals and other rubbish. I imagine most people couldn’t find Etruscia on a map.

That last bit was a joke, by the way – the Etruscan culture died away a long time ago. Moving on.

One thing that we do know about the name of the game is that aside from the game itself being called Baccarat, that term is also used for a hand that totals zero. See some related terminology here.

Supposedly this term means zero in some European language, but I couldn’t find any evidence to support that claim. It’s not important. Nowadays, the term also means a hand that has a value of zero, and possibly also refers to any card, such as tens or face cards, that also have a value of zero.

Before the game as we know it now became predominant, the version played was called ‘Chemin de Fer’ – which means railroad – and was slightly different to the modern game, being more complicated in the rules.

Since the growth of gambling in the United States and the advent of internet gambling, the game has evolved yet again, and the version that you see in most land based and online casinos is now more properly called mini baccarat.

In the original version, you were required to actually know how to play the game, and you could also refuse to take a card, which, under the rules of the modern game, you cannot do. In the Chemin de Fer version, the ‘bank’ passed back and forth between two players, so you actually played the hand that had the appropriate name; if you were ‘dealing’ then you won or lost on the outcoome of the bankers hand.

As you might know by now, in the modern game, you can bet on either hand, or the tie, and the house is always the banker.

The built in mathematical edge that the house enjoys – the slight sifference between the real odds of a hand winning, and the odds that the casino pays out – ensures that they make a profit over the long run. It doesn’t really matter to them then which hand wins.

Because of the transition from a game where you could be either the banker or the player to a game where it didn’t matter, there is an overusage of the term ‘player’. Player hand you may think refers to your hand, when in fact it doesn’t really.

When I first started playing Baccarat I found the terminology somewhat confusing.

Once the complicated rules were removed it was relatively easy to introduce the game to land based casinos. That seems to have happened in the U.S. in Nevada during the 1950’s. A gambling game being introduced into a town full of gamblers could have been expected to be a hit, and it was. Now it is a standard table game in most, if not all, land based casinos worldwide.

A certain air of exclusivity has remained associated with it though, and many high rollers (gamblers that like to bet big) like to play it. That is possibly because of the high table limits that can still be found in major casinos around the world. Although the high limits could in fact derive from the fact that these players like to play at those high stakes.

Of course, one of the most iconic images related to Baccarat is of the various James Bond characters facing down a villian over the cards, usually for very high stakes.

The scenes of James Bond playing Baccarat in many movies may have helped to make the game more popular.

The use of the game in the various Bond films may have made it more interesting for gamblers in real life, and encouraged them to find out more about it.

The most popular version of this in online casinos is a stripped down, roll-of-the-dice kind of game, where you place your bets and the cards are dealt according to a strict set of drawing rules. The player has no say in whether a card is drawn or not. The totals of the two hands determine what will happen next, and the dealer (software) will act accordingly.

In some software versions, notably the MicroGaming one, you have to turn over the cards that you are dealt. You can also turn up a corner of the card to see waht is under. All of that seems rather pointless though, as you will have to show the cards eventually. The dealer, or the software, already knows the value of your hand, so I fail to see the point of that.

Because the action is determined based on the value of the hands and no decisions have to be made, I feel that it lends itself to the use of systems rather well. While it is similiar to Blackjack, there are decisions that the player can make in that game that will have a bearing on the outcome of the hand. There are no decisions here, so all a system player has to do is work out how much to bet on the next hand once the current hand has played out.

I’m sorry if you came here looking for a detailed history of the early origins of the game; aside from the fact that I find that pointless and uninteresting, it really cannot be known with any degree of certainty. But if you would like some badly written, or re-written, version of a made up story, there are plenty to be had on the internet.