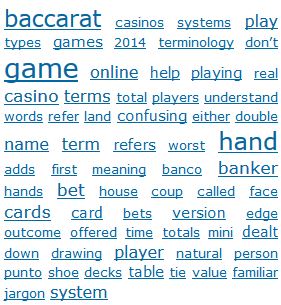 Baccarat terminology can be confusing

You don’t really need to know the terminology of the game in order to play online Baccarat, but, just like anything, it will help you play more confidently if you know the basic language that will be used in the game. If you plan on playing in a real casino, or a live online casino, knowing the terms used will most certainly help, as you won’t feel like a total rookie. And you will be able to talk to other players and understand what they are saying to you.

You will pick the lingo up rapidly from playing for a while anyway, but here is a list of the various words used in the game. Some terms only refer to the land based casino game. One thing about the terms used in Baccarat is the confusing use of words that either have double meanings, or are more intuitively understood as meaninig something else. But we hope to untangle all that here.

A hand showing a Baccarat or Zero value hand. All the player hand cards add up to zero.

Baccarat
Aside from being the name of the game, this term refers to the worst hand in the game, which is any hand that adds up to zero. This is just the first of the confusing double meaning terms involved in this game.

Banco
Another name for the banker.

Banker
The name for one of the two hands in the game. Banker Bet means to bet on this hand. This does not refer to the house, or the dealer.

Coup
A round, that is one game, of Baccarat is properly called a coup.

Face Cards
Same as in other card games, A Jack, Queen or King card – any card that has a ‘face’ on it.

Fading
This simply means placing bets. It does not apply in the online version, but I like the term.

House Edge
The margin built in to the game to ensure that the casino will make a profit no matter what the outcome of the hand. It is the difference between the true chance of a hand winning, and the return offered by the casino when that hand wins, which will be slightly lower. This edge is what adds up over time to eat away at your bankroll.

La Grande
Not an online term, this is a slang name for a hand that totals nine.

La Petite
Another non-online term, meaning any hand that totals to eight.

Mini Baccarat
This is a faster version of the game, where all the cards are dealt face up. This is the version that you will find online. In land based casinos, the players are dealt their cards face down and can make decisions regarding drawing cards. In mini baccarat, the drawing rules are followed without player interaction.

The banker hand shows a natural

Natural
If the first two cards dealt to either the player hand or banker hand total eight or nine, this is known as a natural.

Player
This term can be a bit confusing, as you may think it refers to you, the person playing the game. In fact, it refers to one of the two hands dealt out in the game, the other hand is called the Banker. It is not really your hand, as you can bet on either on. A Player Bet means to bet on this hand to win.

The person playing the game is referred to as the Punter.

Punto
Another name for the Player hand. With Banco, the alternative name for the Banker hand, this gives us the other well used name for this game, Punto Banco.

Shoe
The box that contains the decks of cards used in the game. This is not a game specific term, it is generally used in table games. In this game, it will contain all the decks used, which will be up to six or eight decks. In the online software, the Shoe is represented on the table, and is where the cards are dealt from.

Tie
The third type of bet you can make in this game. The odds offered are usually very poor, making it the worst value bet. Also this refers to the outcome of a hand where the player hand value and the banker hand value are equal. Bets on both the player and banker are returned; bets on the tie bet are paid out.

Upcard
Same as in other card games that show some cards, meaning any card that can be seen by the players.

You don’t need to know these terms to play the online version of the game. However, as I said above, the use of common terms to mean something different can make things confusing, especially when you start to play for the first time. So getting familiar with the words used will help you to understand what is going on at the table. Once you have the jargon down, you can focus on working your systems.

In a real life casino it will probably be more important to know these terms, and it will be a lot of help to be familiar with the jargon that will be used at the table, but in reality not being very familiar with all the terminology shouldn’t be a big problem for you.